LEARNING AND TEACHING SINCE 1887

For more than one hundred and thirty years, Aldapeta hill has been a landmark for the educational community. 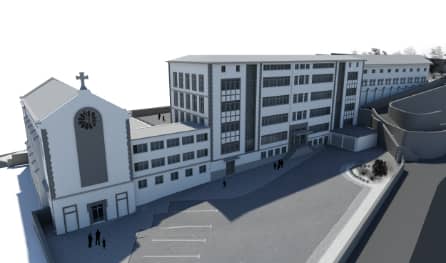 In 2012, the three Marianist schools in the area, Compañía de María, Marianistas and Villa Belén, decided to join our forces and educational tradition to create the school that we are today, Aldapeta Maria ikastetxea.

This new educational project, inspired by the tradition of Basque Christian Schools, was launched to provide quality education with instilled values to future generations.

At Aldapeta Maria ikastetxea, we believe that educational projects are not defined by the number of activities that are organised, but by the quality of the ideals behind them and how they are effectively defined in a sequence of didactic approaches.

We are committed to providing comprehensive education which fosters the development potential of students as people in all their dimensions.

We are part of the "Kristau Eskola" Christian schools Association in the Basque Country and the network of Marianist Schools in Spain. 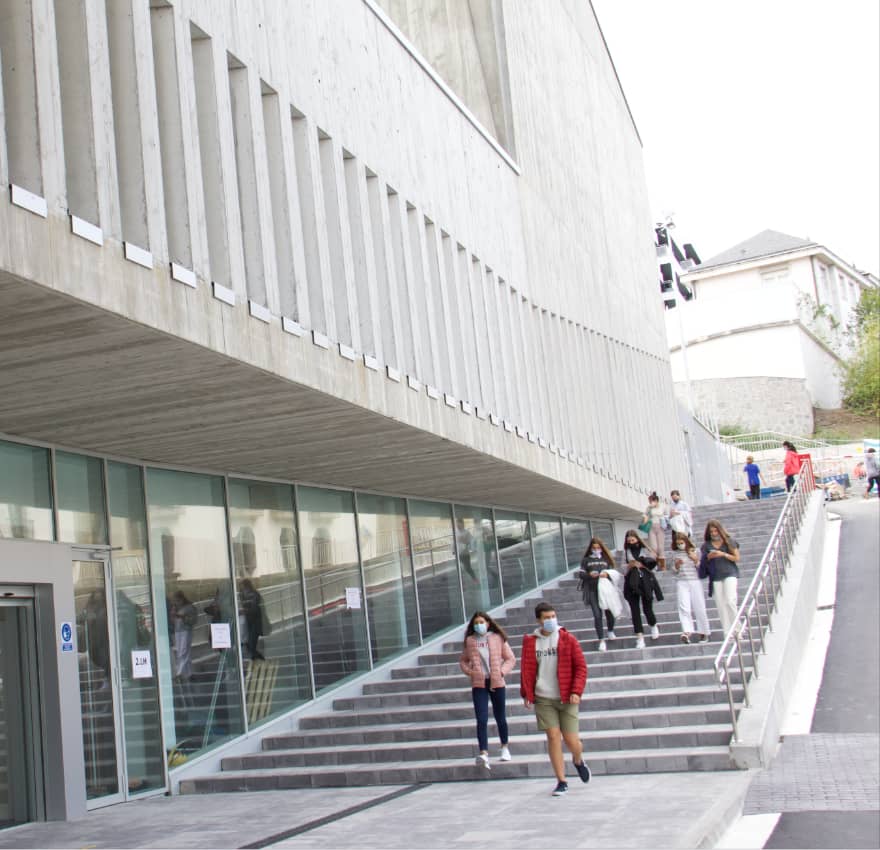 We offer quality comprehensive education with a Christian approach adapted to modern times, with trilingual education based on personal attention and a diverse extracurricular approach.

Our work is to provide the best possible education to the children and young people of Donostialdea which integrates and responds to the needs of the future.

We share our work as a school with families and society. We believe in plural education that goes beyond the school environment.

We aspire to revitalise our Christian tradition and values, with appealing Youth Ministry activities.

We respond to the needs of tomorrow through didactic and pedagogical renewal at a new centre that both unites and identifies us.

We are a team committed to excellence and management, with advanced methodologies and an attractive educational project.

A journey through our history

Arrival of the Marianists in Donostia-San Sebastián.

On October 3, 1887, the Marianists began their educational task in our city, this was also the beginning of their presence in Spain. The proximity of another Marianist school in San Juan de Luz and the commendable work of Mr. Miguel de Areilza facilitated their introduction into Donostia society. The first building was occupied on a rental basis at the junction of Calle de la Marina and San Martín. 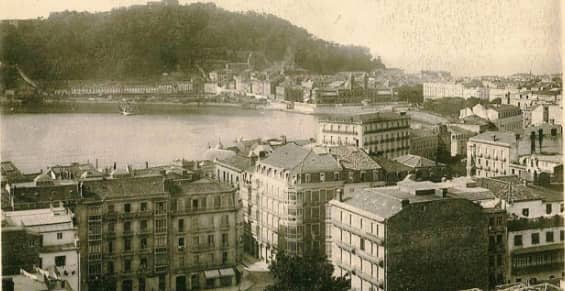 Acquisition of land for the definitive settlement: Beloca and Buena Vista.

The favourable impact of the pedagogy of the Marianist educators on local families caused the number of students to grow at a remarkable rate, outgrowing the initial building. The search began for a nearby suitable location and resulted in the acquisition of the Beloca mansion and its lands (March 1889) and the adjoining Buena Vista mansion and its plot (June 1889) in the San Martín Alto area (Aldapeta). 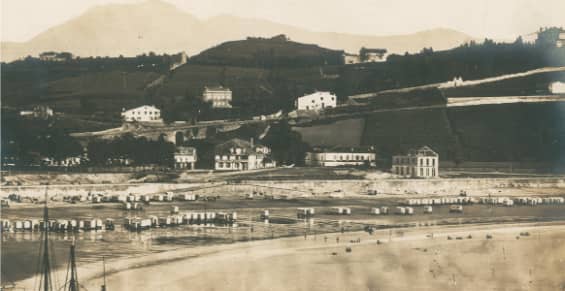 Original school and its annexes.

Soon the activity began at Beloca. After a somewhat precarious use of the mansion as an infirmary, accommodation for the religious, provisional chapel and space for some classes, the concept of constructing a school began, in various phases, with the appropriate characteristics for this purpose.

On October 10, 1890, the wooden provisional pavilion of Santiago was inaugurated, it remained standing until it was destroyed by a fire in 1949. It was later rebuilt in cement in 1950 and stands until the present day (2018). Classes began in 1892 in the Central building, the core body of the Santa María Catholic School, with two wings and a two-sided roof. In 1900, the Buena Vista mansion was demolished to build the Collegiate Chapel (1902) underneath the Gymnasium, which was later converted into an Assembly Hall. To unite the buildings with the central body, the Enlace pavilion (1904) was constructed. From 1904 to 1962, the Santa María Catholic School maintained this layout and a sober and austere appearance. 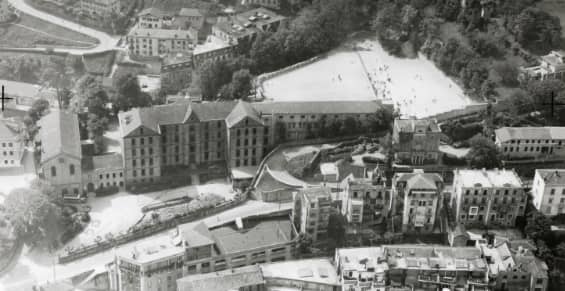 He was the first Spanish director of the School after previous French directors. His impact during the nine years of his direction was profound, both on the students and the families. His human and intellectual qualities were reflected in his lectures on religion, education and authority in the Catholic Circle. Attentive to the initiatives of the students, he promoted the launch of the School magazines and wrote a complete course on Christian Doctrine and Life, to great success, it was widely disseminated and became a benchmark in education and pedagogy. He left the School when he was appointed as Provincial Superior. His beatification process is currently open. 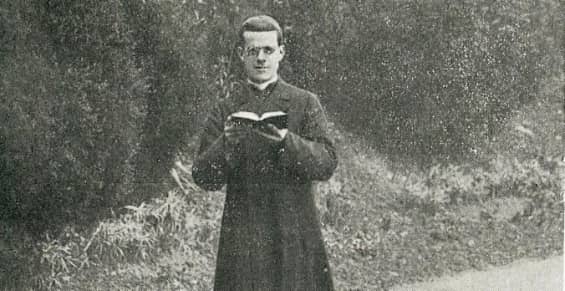 Tribute to teachers and students killed in the Civil War. Headstones for the fallen.

Sympathetic to the atmosphere after the Civil War, and in mourning for the deaths of family and friends, the School paid tribute to its fallen teachers and students on October 19, 1939. Two headstones inscribed with 78 names were laid in the presence of students and families, as well as members of the civil, ecclesiastical and military authorities. These headstones, on either side of the adjoining entrance to the chapel, remained until 1962 when they were removed during renovations.

Golden Anniversary. Commemoration of the 50 years of the founding of the school.

In 1940, the School celebrated its Golden Founding Anniversary. Though this should have been celebrated in 1937, the war made this an inappropriate time for celebration. It was commemorated at the end of the war. A beautiful silver plaque was hung and a Golden Book was signed by teachers and students who were witnesses to this event, as well as a large concentration of former students.

Taking advantage of the occasion, the Alumni Association hung a plaque of remembrance and appreciation on the building of la Marina y San Martín, where the Marianists began their labour in 1887. It was preserved until the 90s when it was broken in the course of renovations to the façade. 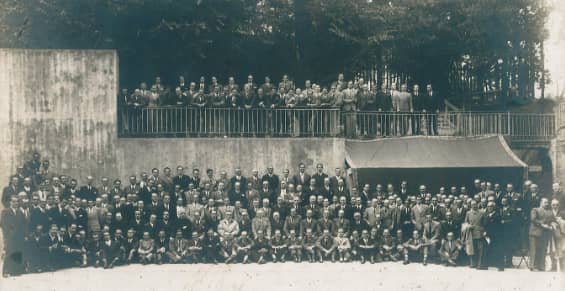 75th anniversary of the founding of the Santa María Catholic School.

In the academic years of 1962-1963, the 75th Founding Anniversary was celebrated. For this reason, the Authorities wanted to recognize the public service of the Marianists with a series of distinctions:

Similarly, the City Council awarded the School with la Corbata de la Ciudad, the Centennial Medal and the Medal and Diploma of Merit in Teaching.

In the summer of 1962, major renovations began that profoundly changed the interior of the Chapel and the entire exterior façade of the school, creating new spaces and giving it a new appearance until its recent demolition (2019). 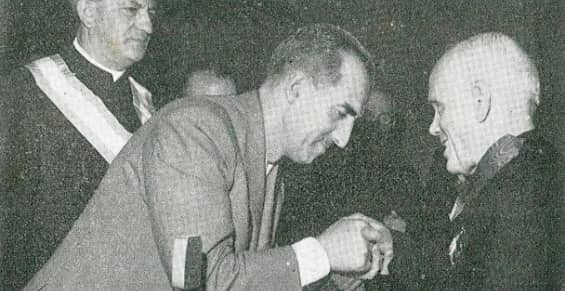 Directorate of Father José Ángel Otaegui, the longest in history.

Former student and Marianist from Donostia, his period as director was the longest in the school's history and spanned a time of profound political and social change. Along with his dedication to the students, families and teachers during this complicated transition, he also carried out important works on the sports and academic facilities of the school: the lowering of the lower patio to create three levels of courtyards; the construction of the underground Beloca pavilion on the southern side and the splendid Poly sports Centre. The culmination of his directorship was the celebration of the Centennial Anniversary of the Santa María Catholic School. 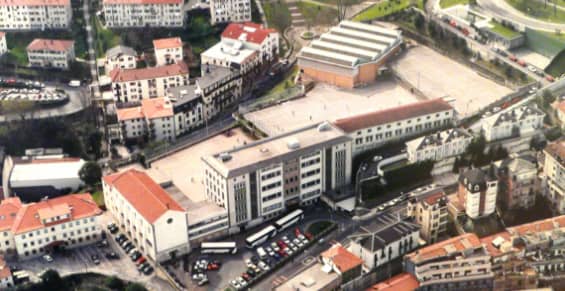 Centenary of the College and the arrival of the Marianists in Spain.

With great enthusiasm and well-deserved satisfaction, the celebration of one hundred years of the San Sebastián school was held. The commemorative events took place on October 10 and 11: Thanksgiving Eucharist in Santa María and the Academic Act at the Victoria Eugenia Theatre with a Conference held by Mr. Juan Laboa and a Concert by the Orfeón Donostiarra. A meal followed at the Hotel Costa Vasca.

More specific achievements: the book on the school's history “One Hundred Years of Marianist Presence in San Sebastián” (F. Ríos and F. Gastaminza, History teachers) and the celebration of the Marianist Olympiad. 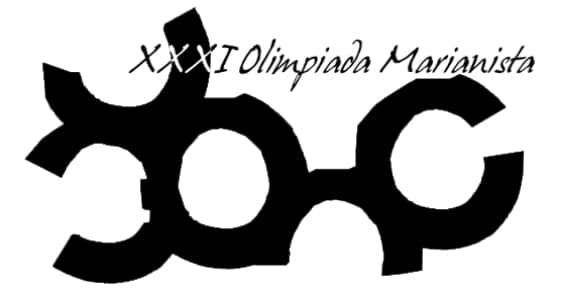 Under the leadership of José María Felices, Early Childhood Education was incorporated into the school to respond to growing demand at that time. The necessary works were carried out to create a new space. An intermediate floor was constructed by raising the floor of the Chapel and lowering the ceiling of the Assembly Hall to house the Early Childhood Education classrooms. Around this time, model B (bilingual) was introduced. 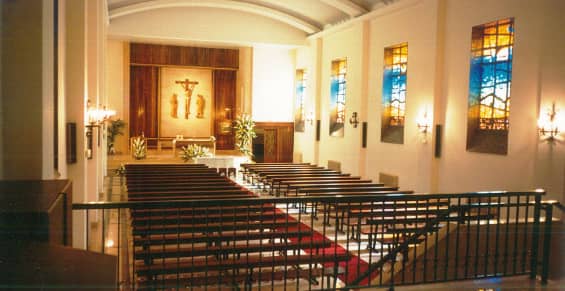 After the necessary steps were taken between la Compañía de María (Marianistas) and la Compañía de María No. S, la Enseñanza, regarding a joint educational approach for the Baccalaureate program, a unified Baccalaureate for the two centres was created, known as MCM. This denomination lasted until its integration into the Summa Aldapeta project. The MCM Baccalaureate began in the academic year of 2005-2006 under the direction of JM Garagorri and Víctor Vitoria. 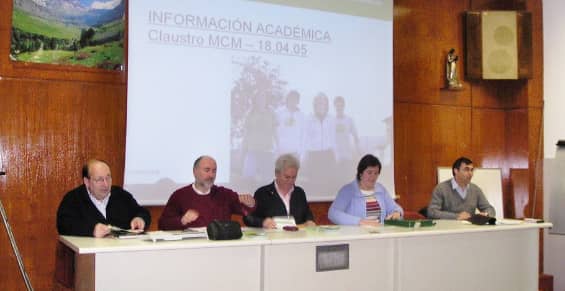 Given the demographic, social and economic situation, a demand grew from the Church schools to provide a response aligned with the new educational and evangelical challenges. Over several years and after multiple meetings between the representatives of la Compañía de María (SM), Cia de María Nuestra Señora (ODN) and Hijas de María Inmaculada (FMI), an agreement was reached to jointly develop a common educational project, a comprehensive school, in three different locations. That project was SUMMA Aldapeta, which began in the academic year of 2012-2013 under the direction of Miguel Ángel Dieste. In 2012, different events were hosted to celebrate 125 years of Marianists. 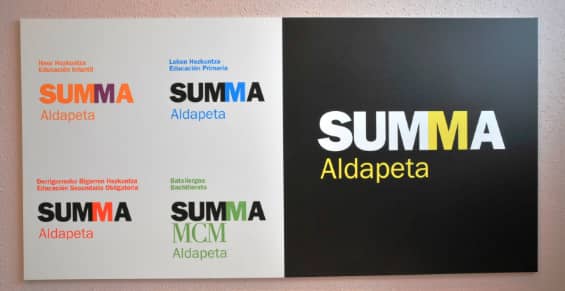 The challenge of a new school.

The new director, Fr. Javier Cortés, arrived in 2015 with the responsibility of bringing a courageous and determined commitment of the Marianists to life: building a new school for the 21st century. Its construction was accompanied by the painful demolition, in different stages, of the centennial school. The reduction of space forced the Baccalaureate to be temporarily moved to Villa Asunción, in Alto de Miracruz. Currently, the new school is in operation, phase I was completed, while work is being carried out at a good pace on phase II. It aspires to be a European benchmark in the field of education. 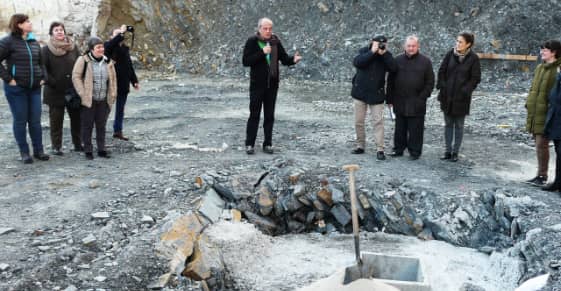 A new school, with a new name and a new identity. SUMMA Aldapeta evolves and becomes Aldapeta Maria ikastetxea. 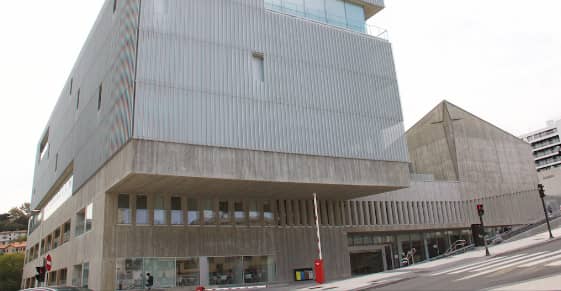 We believe in education that goes beyond the traditional educator-student relationship.

Our team is made up of motivated and qualified staff to guide the children in their development, including professionals specialized in pedagogy and psychology to provide support during each of the formative stages.

We believe in a rejuvenated educational approach adapted to these modern times that reflects our enthusiasm to teach and continue learning.

In 1887, we began an educational project inspired by the Christian tradition and values that identify us. Today, we bring these dreams to life with the clear objective of providing quality education capable of responding to new challenges.